More Balls Than Sense: My Love Affair with Italy 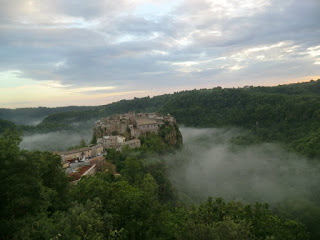 Almost a year ago, I quit my job as a personal trainer and group fitness instructor, sold my blue Kia Rio, unloaded my furniture, packed what was left of my earthly belongings into two bags, and flew on a buddy pass to Rome. It sounds so cut-and-dry, I know. Make a plan. Execute the plan.

But it was I who felt as though she'd been executed. I left behind some amazing friends, a job I loved, my eighteen-year-old son who, quite understandably, had no interest in going with me, plus my daughter who was scheduled to fly over a month later. The odds of her liking Italy were slim, at best, but it was a chance we had to take. I vowed that I would not commit ritual suicide if she opted to go back home again. This was a huge move for me, let alone an adorably social fourteen-year-old girl who, like most of her kind, loved Fall Out Boys, Taco Bell, and the mall.

There's no mall in the medieval village of Calcata, Italy. There isn't even an ATM machine.

A week before leaving, I had what amounted to a mini nervous breakdown with the hyperventilating and the sweating and the late night calls to the friends I felt as though I were abandoning. There were also other, larger, issues at play in my drippy leave-taking. I had to muck around in my own psychological mud puddles, ones of trust and dependency. My love affair wasn't just with Italy, but a man I met there, a remarkable, unique, and wholly un-replaceable man. After years of flying solo, I was now rolling the dice in a way that left me questioning whether I could actually go through with this, whether I'd lost my mind, whether I had the guts (or the craziness) to walk that flimsy a tightrope in high heels and without a net.

If my past history with love was anything to hang my hat on, there was no hat to hang. My taste in men was as infamously bad as my politics were leftist. I was flying against all sense and logic by making this move. I didn't speak Italian; I spoke phrasebook. I was giving up a steady paycheck to write--what a joke! Statistically, I stood a better chance of contracting a hemorrhagic disease than making my living with my pen. And now I would be leaning hard on someone else to help me navigate simple life transactions like buying groceries or pumping gas. We would also be doing some navigation of our own as we tried to match up our emotional baggage. That gets harder as you get older. They never tell you that, but it's true.

To my face, my friends were wonderfully supportive, even admiring. Breaking out of Rikers is easier than breaking out of a comfort zone. They knew that. But behind my back, I imagine they must have expressed some justifiable doubts. In one form or another, some directly, others less so, the people I knew asked me why I had decided to leave.

Here then is my answer.

Every morning in the U.S., I woke up on the wrong side of capitalism. I loved my job, but I was working seven days a week and still couldn't pay my bills. The utilitarian ugliness of Houston's freeway/stripmall/suburb bore down on me, day in and day out, like a slow gray depression. Going to the supermarket with its bright shiny aisles and over-processed everything was like a stab wound. So were the seventy-dollars-for-two-bags-of-crap.

Nothing in Italy is bright or shiny. It's old and ramshackle. I don't hear sirens all day or see billboards the size of swimming pools. I hear church bells and roosters. Roses grow in wild profusion over crumbling stone walls. Grapes spill over trellises. The village I live in, Calcata, is fraught with internecine warfare, but we all know each other.

Returning to the U.S. after my various junkets abroad had, at one time, left me stunned and sad and a little panicky. I couldn't "land." Maybe I was afraid to. Maybe I worried, on some level, that I would get trapped there in the delicate filament wires of ease, comfort, convenience, like the victim of a thirsty spider.

In my kingdom, I was tiny queen. But I had no choice but to abdicate if I wanted to follow my bliss. It felt selfish to me, yet the alternative--to make myself vague promises of doing it later--was not only delusional, it was a lie.

Do I miss the U.S.? Not in the slightest. What's toxic about American culture is the stuff of another blog post. In fact, my native land feels increasingly unreal to me. Is life easy in Italy? Never. We freeze in the winter; we sweat in the summer. Sometimes we're so poor, we eat borrowed potatoes and not much else. Italy is never convenient. And since I write all day in English, it undermines my daily attempts to study Italian. It's a damned difficult language to learn, by the way. Italian grammar is a cross between Times Square and the Inquisition.

But ... you can't regret the things you did for love. And I will never regret this. I have been changed irrevocably, have struggled and grown and will struggle again.

I am deeply, viscerally alive.