Schadenfreude is Dark Chocolate for the American Soul 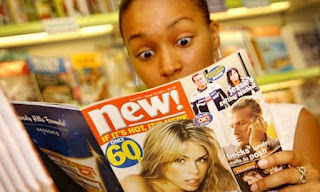 No one wants to bang an actress over forty.

That's the prevailing wisdom in Hollywood--in the near-pornographic intimacy of high-def, you might see a wrinkle or a deflated boob or an ass that's a centimeter or two lower than it was when that actress starred in the rom-com that launched her career twenty years ago.

Meanwhile, their male cohorts begin to look like thirsty old vampires with their crepey eyelids and liver-spotted pedophilic hands pawing onscreen love interests half their age. Hey, Hollywood is the land of dreams, and dreams die hard.

We depend on celebrities to show us a wildly idealized version of how our lives should be. Not only do we need them to be perfect, we will cannibalize them for being anything less. Jessica Simpson's high-waisted jeans and five extra pounds, for instance. The dust-up over Renee Zellweger's new dermal-filled, plasticine, Jesus-who-the-hell-is-that face. Pamela Anderson's freaky McDonald's arch eyebrows and vain attempts to remain fuckable. Pick up any magazine and you will see why the most aggressive paparazzi get paid big bucks to snap a bad photo of any woman who has the temerity to be both beautiful and famous.

Schadenfreude is dark chocolate for the American soul.

But here's the thing. I'm not going to bitch about Hollywood or "the system" or even the paparazzi. I'm going to point the finger where the finger needs to be pointed, which is at us. All of us. For our ghoulish fascination with fallen idols. We build them up and tear them down with the same vicious glee, forking over money at every news stand to see Tara Reid's "shark bitten" overly-liposuctioned tummy or a Kim Basinger "tragically" looking her age. There's a low-grade resentment among women. Why do these twats get paid millions of dollars? They're nothing special. They're flawed and human, just like we are.

Our critical eyes make them desperate. We take to Tumblr and Twitter and Instagram and the National Enquirer, poring over photos--damning evidence that these celebrities aren't worthy of the attention and money we give them. And the dissemination of bad photos may impact an actress's financial bottom line. An actress caught at a bad angle may not be considered for the roles she needs in order to pay the rent.

Like Heidi Montag, (she-of-the-ten-surgeries-in-one-day), these frantic creatures resort to expensive, invasive procedures, and they do it at increasingly younger ages. Heidi was twenty-five went she got her first face lift. And what did we do? We despised her for it. We flamed her for "cheating." After all, the rules are clear: don't expect us to treat you like a god unless you are one. And anybody who resorts to surgery is a false idol.

Because of us, women in Hollywood look as though they are made of vinyl. Because of us, they down Adderall by the handful, live on sushi and cigarettes, in order to even have careers. Only the few (Meryl Streep, Emma Thompson) who are lucky enough to be both talented AND beautiful are given any kind of a hall pass. Even news anchors are pressured to look as crease-free as possible. News anchors. Think about that for a minute.

So how do we stop this Juggernaut?

First, we take a good hard look at ourselves. What itch gets scratched when we see a bald Britney Spears going psycho with an umbrella on somebody's car? Are we proud of that morbid curiosity? Every time we click on a link that promises to show us celebrity cellulite, we are encouraging women-abusing vermin to gin up unflattering photos that will prove to us, once and for all, those bitches aren't better than we are. We relegate celebrities--and by extension, all women--to a trash heap of fuckable, unfuckable, and heading in the direction of unfuckable, regardless of talent. Don't do it. Don't buy the magazine. Don't fall for the clickbait.

In the end, if we want to see better roles for women in Hollywood and better women in those roles, women need to stop objectifying women. We need to move beyond our knee-jerk habit of comparing our bodies, favorably or unfavorably, to those of the celebrities we see. Our collective attention is meat for the consumerist beast, but if we start looking the other way, the beast has no choice but to find a different way to entice us.

Posted by Unknown at 6:17 AM No comments: