How to Write a Bestseller Before You're Twenty 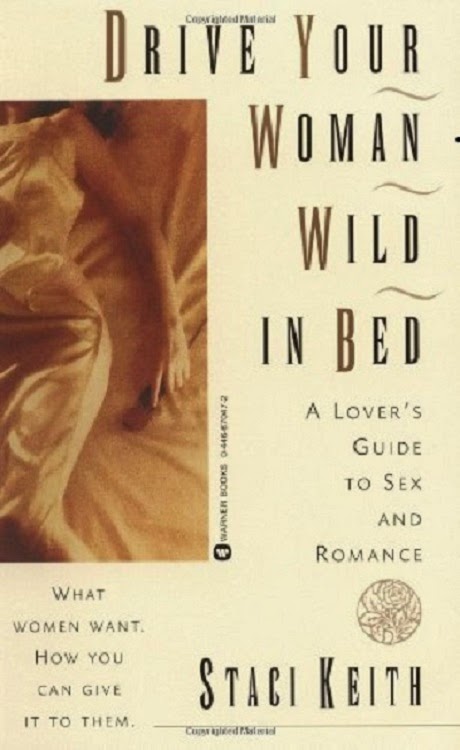 I wrote DRIVE YOUR WOMAN WILD IN BED when I was nineteen. It started out as a dare, of sorts. I was in college at the time, and a bunch of us girls were talking shit after class--you remember how that went, right? Bitching about guys as a backhanded way of saying you had one.

And at the time, I was seeing this hot musician, but complained that he couldn't find a clitoris if you built him a three-dimensional model of one. A particularly smart friend of mine said, "You should write a book about that."

To make ends meet, I taught group fitness and "Getting in Touch with Your Inner Goddess" classes at this continuing education organization called The Learning Annex. The director happened to be in the office on the day I showed up to collect my check. We got to talking, and I mentioned this book I'd been working on. You could practically see the cartoon dollar signs floating out of his irises.

But he made the magic. Within a week, "The Joan Rivers Show" called and got me on their program. There was no book yet, so we had to mock one up. I showed up, all earnest in my "Forbes business attire for women" and teenage cluelessness. Actress Sean Young was in the green room, tall and lovely and lacking any kind of social filter. She put her hands on my boobs, honked them, and then said, "Jesus Christ, those fuckers are real!"

No dummy, Joan, she threw me plenty of softballs, which I caught--due to her kindness, not my ability to field. I was plenty pleased with myself, except for the fact that none of my friends from college could be bothered to watch my segment. Who cared? I was able to send out query letters to agents that had "As seen on the Joan Rivers Show" right across the banner.

The offers for representation came rolling in. I had no idea how rare and wonderful this was. I just thought that was what happened when you queried agents. I flew to New York and was wined and dined at the Russian Tea Room by John Grisham's agent. Wasn't everybody?

The book went to auction, which is publisher-speak for bidding war. I sat there in my big girl Underoos and listened while Simon & Schuster, Berkeley-Putnam, and a third publisher I can't remember knocked each other out for the chance to publish my "fabulous" book. The advance offered kept going higher. And I was flying high, too. After conferring with my agent, I went with Berkeley, in large part because the Simon & Schuster editor took one look at me, gave me a sickly-sweet smile, and then asked in the same tones one might use on a mildly-retarded toddler if I had actually written the thing.

I was rolling in puppies now! I spoke at Berkeley's big sales expo. I was a novelty, like a talking monkey or a pig that can count by stamping its hoof. I didn't know it, though, that I was part of the joke. I was still on my mission to right the wrongs of clitorises, to help give them their day in the sun. As it were.

But my agent and I couldn't seem to get a contract going. Her agency didn't want the rights to just that book, but to all my books in perpetuity, including monies accrued from lecture fees. As naive as I was, I understood the pitfalls of such a contract. We were at a standstill.

One month went by. Two months. On a robust morning in April, while I was drinking diet Coke and playing Nintendo, the phone rang. It was the editor at Berkeley. Because no contract had been signed, they had decided to drop my advance by seventy thousand dollars. I was devastated.

When I called my agent to ask why in hell no contract from Berkeley had ever been presented to me, she hemmed and hawed until finally admitting she'd decided against mentioning it until she had me under agency contract.

Oh, the buckets of tears I shed. In desperation, I called my mother and asked for her advice. She was smart and barracuda-ish, so I listened when she told me to walk away from the whole deal. I did.

Once again, I began the process of finding an agent. But the momentum had changed. Taking on a book like this was tantamount to sucking on the ass end of a week-old cod. By some miracle, I found a great agent who did the impossible: he sold the book to Warner. The upfront money wasn't anything like what I'd been offered before, but I was happy to have a deal signed.

Should I have just taken it in the shorts by my first agent? Who knows. Hindsight may be 20/20, but psychic hindsight ain't worth the effort to scratch. Personally, I'm thrilled that things worked out the way they did. Not only did I land a trustworthy, hard-hitting New York agent, but I learned another important lesson, which was this: young people don't know dick. They may know where a dick goes, but in terms of navigating the nether-realms where real dicks tend to congregate, I--like all others of my age--was out of my depth.

People ask me all the time why I didn't include this story in STRIPPED DOWN: A Naked Memoir, which chronicles my life as a stripper/cover girl/centerfold. The truth is, if I had cataloged both halves of my life in that one book, I would have written something that rivaled the length of Stephen King's THE STAND.

A writer's life is a tumultuous one. Every book you write is both a labor and a birth. And you never know what you're going to get or where that book is going to go.