Geeks, Boobs, and Anne Boleyn: My Life as a Truant 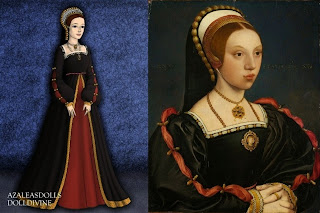 When I was twelve, I skipped school for six weeks and wrote my first novel. It was about Henry VIII's fifth wife, Kathryn Howard, but the point-of-view character was her sister, Isabella Baynton, who was married to Kathryn's Vice Chamberlain. It was wildly overwritten, in the way of first novels...and you're wondering why on earth a twelve-year-old would even find something like that interesting, let alone write a novel about it. Skipping school is hardly mystifying, of course, since most of us spent our incarceration there dreaming of a jailbreak.

My long-suffering single mother would go to work in the morning. I waved cheerily from the bus stop as she drove past with her coffee in hand, barely awake, barely functional, a preview of things to come when, many years hence, I was the single mother chuffing by, bleary-eyed and tragically under-caffeinated. The minute her car turned the corner, I raced back into the house and locked the door.

Any right-thinking kid--any NORMAL kid--would have rolled a joint or trawled for beer or gotten in a shitload of trouble. But I was far from normal. I was a geek. I didn't look like one, but at no point in my life has my outside matched my inside. Outside, it was all boobs and sarcasm. Inside, it was a hundred geeky enthusiasms. English history was one of them.

I knew more about the Tudors and the Elizabethans and the Jacobeans and the Stuarts than most people knew about their own family trees. I was fascinated by the idea of just bulldozing over people to get your way, whether it was a divorce, a woman, or a war. Henry VIII enclosed feudal lands, drove off the peasants, balkanized England, beheaded dissenters, and gave the Pope his stiff middle finger. He was a tyrant in every sense of the word, a despicable, horrible man, and I couldn't feed my hungry brain enough information about this period of time when women navigated by their beauty, wits, and wiles. Anne Boleyn, Henry's second wife, held him at bay for six years so he'd marry her. He may have been the King of England, but Anne worked him like a meat puppet.

I'd write longhand. I still write longhand. I'd plow through my mother's records and put Bach or Chopin, something classical, on the turntable. I was insane with joy. The whole day stretched before me, hours and hours of unstructured time, time to do what I wanted to do, which was to write. When the school called, I pretended to be sick. "My mother's at work," I'd rasp. "The doctor said not to come back to school until I was no longer contagious."

Meanwhile, the novel continued apace. I never worried about school or catching up or my grades, because I didn't give a fuck. All I wanted to do was write. I had no grand expectations about "being a writer" or starving elegantly in a garret in Paris or pulling down a serious advance. I didn't even know about those things. All I was certain of was the high probability of dying a slow miserable death in social science class or by the Latina girls who liked to punch the snot out of me or on the school bus, which belched diesel fumes toxic enough to kill us all if we idled too long at a light. This is the public school experience for many of us. We are tethered to a desk, or many desks, for eight hours a day. We are forced to pay attention or suffer the consequences--which usually meant another hour after school tethered to yet another desk.

As adults, we know for a fact that we would never put up with that bullshit. Eight hours of sitting and pretending to be interested in crap we know we're never going to use in "real life?" Worse, being taught the same way and using the same techniques (i.e. rote memorization) as students were 150 years ago? Who on earth could possibly blame a child for preferring to write a novel than put up with another second of that over-structured, over-tested, out-of-touch, regressive, aggressive, oppressive, suppressive hell?

Well, my mother did, for one. When she found out (no doubt through some brazen attempt by the school to contact her personally), she didn't know whether to hug me or slap me. What does any parent do with a child who is genetically incapable of toeing the line? I was sent back to school, of course. But from that day forward, I may have been physically present and accounted for, but the part of me they wanted, the part of me they were working so hard to "get" was gone until college. In college, I was allowed to study what I wanted.